August 19, 2015
EDIT (12/2/15) Recipe has been tweaked since first publishing! I now add the marinade towards the end of the cooking process, since I find that lessens the chances of the skin sticking to the pan. The slaw recipe has also been simplified with coleslaw mix!
-----
Striving to get out of my comfort zone a little bit, I decided to go for some Asian flavors tonight. Even though I'm part Filipino I actually don't do a whole lot of Asian-style dishes! I know the general flavor profile, so I played around with that and I think I stumbled on something good! 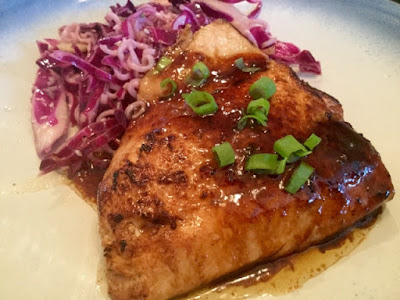 Here's the recipe! Roughly 2 servings here, for almost a pound of salmon

1. Mix the marinade ingredients.
2. Season the salmon with salt and pepper and cook in a pan with a little sesame oil, about 3-4 minutes per side.
3. After flipping salmon once, pour half the marinade in the pan and let it reduce and thicken as the salmon finishes cooking. The other half of the marinade can be used as the dressing for the slaw. 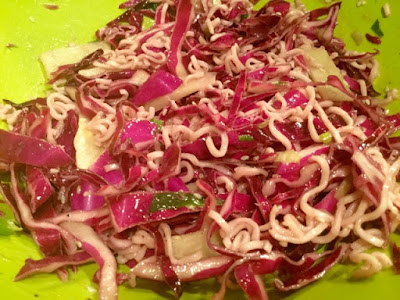 1. Start by breaking up the ramen noodles into smaller pieces. Then cook as instructed (leave out the seasoning packet).
2. Mix coleslaw mix, ramen noodles, and sesame seeds and toss in the remaining marinade.
4. Let chill in the refrigerator, preferably an hour or two to let the flavors combine.

Lucas cleaned his plate and then some... So I think I'll be making this one again! 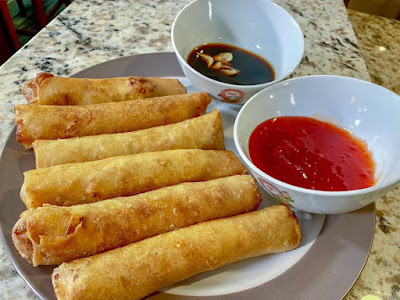 Servings: About a dozen eggrolls INGREDIENTS: Lumpia wrappers 3 cups of medium shrimp, raw, peeled, deveined, tails off 1 cup cabbage, chopped 1 cup shredded carrots 1/2 cup bean sprouts 2 eggs 1 tbsp. cornstarch 4 cloves garlic 1/2 small onion Salt and pepper, to taste INSTRUCTIONS: In a food processor, briefly mix shrimp, garlic, onion, cornstarch, egg, shredded carrots, cabbage, salt and pepper. Don't overprocess. (For extra texture, reserve 1/2 of the shrimp, roughly chop it, and add it to the processed mixture.) Fold bean sprouts into the mixture. Spoon 1-2 tablespoons of the filling on the edge of one lumpia wrapper, gently roll up, tucking ends in, and sealing the roll closed using a little water. Heat cooking oil on a pot on the stove. Fry lumpia in batches on medium heat. Cook until golden brown, at least five minutes. Remove lumpia from the oil and drain them on a cooling rack or paper towel. Serve with a dipping sauce of your choice. (Presentati 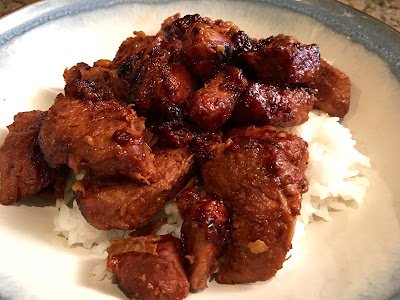 Approx. 4 servings INGREDIENTS 2 lbs. pork shoulder, cut into 1" cubes 3/4 cup white vinegar 3/4 cup soy sauce 4 cloves garlic, minced 1 bay leaf 1/2 sweet yellow onion, finely diced Black pepper, to taste Cooking oil, for sauteing INSTRUCTIONS  In a pot on medium heat, saute onion and garlic in some oil. Cook for a couple minutes, until onions start to turn translucent. Add the pork cubes, stirring frequently, cooking until all sides are just browned. This usually takes about 5 minutes. Mix in vinegar, soy sauce, and bay leaf. Raise to high heat and bring to a boil. Reduce the temperature to medium-low, cover, and simmer until pork is tender and sauce thickens, about an hour. Be sure to stir occasionally to keep the pork from sticking and burning on the bottom! Serve on a bed of rice and enjoy! 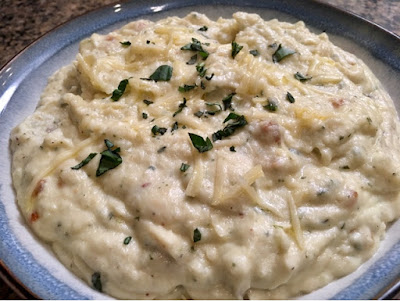 Servings: 6 (1/2 cup) servings INGREDIENTS: 1 head cauliflower 1 1/2 cups chicken broth 1/2 cup heavy cream 2 cups gruyere cheese, grated 2 cloves garlic, minced  2 tbsp. basil, chopped 1/2 cup cream cheese (4 oz.) Salt and pepper, to taste 1/2 tsp. grated nutmeg 1 cup fried bacon or pork belly, chopped (optional) INSTRUCTIONS: Bring a pot of salted water to a boil.  Chop cauliflower into florets. Remove as much of the stem as possible.  Boil cauliflower florets for 10 minutes, until soft.  Drain florets on a towel and discard water.  In same pot, heat chicken broth, cream, garlic, basil and cream cheese. Add seasonings. Bring to a boil, reduce the heat to medium-low, and cook for 5 minutes, to cook out some of the raw garlic flavor.  Add florets into the cream mixture, and turn off stove.  Using a blender or an immersion blender, purée the cauliflower until it's as smooth as possible. If the consistency of the purée is too thin, turn heat back to